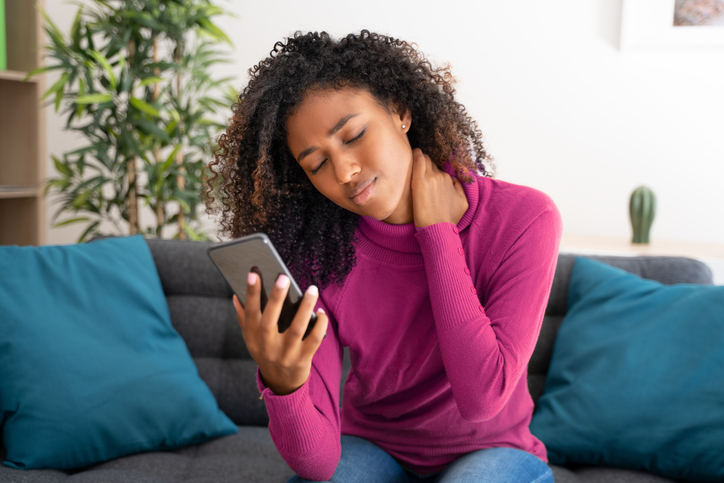 Now that just about everyone, including most kids, has a phone in their pocket everywhere you turn you see people looking down hunched over texting. Text Neck is a new phenomenon, and many people have never even heard of it. Text Neck is the name given to the increasingly common neck, upper back, and shoulder pain many people are experiencing. This pain typically starts in the neck and spreads from there. As you may have surmised, the name “Text Neck” comes from the pain experienced in the neck and upper back from text messaging. Most people text message while looking down, and some people spend hours a day in this position. It is estimated that many people devote two-four hours every day looking down at their smartphone while texting, reading and sending emails, checking their social media, and using apps. That’s 730 – 1,460 hours a year, bending your head forward and down in an unnatural position. The numbers are even worse for teenagers who appear to be permanently attached to their smartphones and may be spending over 5000 hours a year looking down at their laps. And, it’s not just cellphones. Many young people and children use handheld video games and spend hours at a time playing these games.

Text Neck creates the same issues and problems that chiropractors have long associated with the “Forward Head Position.” In extreme cases of forwarding head position, we have all seen people who are permanently bent over when they try to walk and need the assistance of a walker to keep from falling over.

Today, due to Text Neck, we see young children daily experiencing neck pain due to poor posture from the hours they spend each day texting and playing handheld video games. The problem is expected to get worse as more and more people spend hours everyday text messaging and using social media on their phones. The root of the problem is tied to poor posture. As cellphones advanced in capabilities and turned into smartphones with unlimited texting, many people — particularly teenagers — stopped making phone calls and started texting instead. Additionally, high-speed internet connections available through smartphones have brought social media and the internet to the phone. With each new-found capability, individuals are spending more time staring down at their phones.

The number one cause of Text Neck is terrible posture. The human head weighs an average of 10-12 pounds, but the further you lean your head forward and down (like most people do when texting) the more significant the stress you place on your neck and upper spine. When your head is angled down at 30 degrees, it is like having a 40-pound leader, and by the time your head is bent down at a 60˚ angle the weight of your head is equivalent to 60 pounds — not the 10-12 pounds your neck is used to carrying.

The curvature of your neck forms a shape like a “C” with the opening toward your back. If you were to look at a drawing of the entire spine, you would see spine as the whole forms an “S” shape. These curvatures are healthy and necessary as they allow the spine to absorb vertical shock, bend, and turn. However, when we spend hours texting and playing handheld video games with our heads in a downward position, this unnatural position has a detrimental effect on the neck and upper spine.

Where the head leads, the body follows. Spending hours every day in a head down position pulls against the natural curvature of the neck. Over time, instead of a smooth shape toward the back, the cervical spine can be drawn into an upright position or worse, the curvature of the neck can be reversed and bend in the wrong direction. When the head is in a forward and down position for long periods, it pulls at the tissues in the neck, weakens the muscles, and the shoulders start to round forward.

Experiencing neck pain and headaches are usually when people first become aware that something is wrong. However, text neck can cause a lot more problems than a sore throat and headaches. As mentioned earlier in the article, the cervical spine protects the nerves in the neck. When the neck is pulled forward, the cervical spine (neck) and the upper back (thoracic spine) become misaligned, which can cause pinched nerves and even herniated discs.

The importance of the spine in protecting the nerves cannot be overstated. The neck (cervical spine) and the rest of the spine protect the major nerves as they run down the neck, into the back and spread throughout our body. The spine serves to protect the nerves from any interference.

Text Neck will affect the nerves in the cervical spine (C1 – T5) the most. These nerves deal with the functions of your brain, eyes, pituitary glands, sinuses, facial muscles, hearing, and much more. When the vertebrae in your neck are properly aligned, these nerves can function correctly. Text Neck, as it changes the natural curvature of your neck, also changes the size and shape of the openings in the spine these nerves need to use. When this happens, the nerves in the neck get pinched, and the ability of the nerves to function is diminished. Pinched nerves in the neck will cause headaches, pain, sinus problems, thyroid conditions, vision problems, high blood pressure, fatigue, breathing problems, and many more problems. In addition to pinched nerves, text neck can cause further issues to the spine such as herniated discs (slipped discs), disc degeneration, arthritis in the neck, and pain radiating down from the neck into the arms.

Additionally, spending a lot of time with your head bent down reduces your lung capacity, reducing the amount of oxygen going to your brain and circulating throughout your body. Lack of oxygen throughout the body lowers your resistance to disease and slows down the healing process.

As your text neck problem progresses, it will also pull on the muscles (weakening them) and vertebrae of the thoracic spine (upper back) and start to cause subluxations (spinal bone misalignments) and pinched nerves there as well. Physically, your shoulders will begin to round forward, leading to more poor posture, weakened muscles, and a hunched over appearance.

Proactive Measures to Protect Yourself from Text Neck

Awareness of text neck, what causes it, and the problems associated it with should be a wakeup call to be aware of how much time we are spending with our heads in an abnormal position. Merely lifting the phone of video game to a higher position will help a lot.

Third, anyone that does a lot of texting or any activity that has your head in a downward position should see a chiropractor regularly so that the vertebrae in your neck (cervical spine) can be gently moved back to their correct position. Spending time with your neck in a wrong position is guaranteed to cause subluxations (misalignments) in the neck that need to be corrected.

Chiropractors are the most qualified doctors in the medical field to correct text neck and its problems. Since text neck is caused by misalignment of the vertebrae in the neck (cervical spine), it is only natural to go to a chiropractor that is trained to make sure the vertebrae in your spine are correctly aligned.

In health care today, there is a lot of talk about wellness and preventative care. Having your neck and back properly aligned regularly will stop a lot of problems before they even begin. We know that texting in a head down position will cause subluxations (misalignments) in the neck — sooner or later — at any age. And then it is just a matter of time before you start to feel, and experience headaches and other problems associated with text neck. Take steps now prevent text neck.

Everyday Shaw Chiropractic helps correct problems caused by misalignments in the neck and back. Text neck is one of the issues. Call today to schedule your appointment with one of our doctors.

Justin Lagrow
2019-10-22T01:04:02+0000
love that there isnt much of a wait when I go and I'm in an out and yes coming helps me out every time. yes it can be a... little painful but in the same way it feels so go. I'm glade I go and get my adjustments done and happy to know the dr. know what there are doing and explain where the problems are so you can understand later if your having the same problems to get it done sooner rather than later. well recommend to get done.read more

Clayton T Sharrard
2019-04-02T19:06:41+0000
This place is AMAZING. They have really worked with me to provide the best care possible. Dr. Amrbruster goes above... and beyond for Veterans to help some relief. The front desk staff not only asked questions to help me be the most successful but also understood my issues. I haven’t seen this much dedication with medical care in a long time. Dr. Armbruster sets a new bar when it comes to wanting his patience succeed.read more

Coryn May
2017-09-29T23:31:36+0000
Been going to Ian for years. Always get an appointment when I need it their schedule is amazing and what he did for my... sinuses today was unbelievable! I couldn't even get that relief from my medication! You truly are amazing! Thank you for everything all these years.read more

Nancy Lasky
2017-08-19T02:32:51+0000
Today my husband messaged me that he was having trouble breathing because he did something wrong at work and needed to... see a chiropractor. I mentioned Shaw because I recently saw an ad about them. They got him in as a new patient within an hour or so of calling, and he was very impressed with Dr. Armbruster! He back is still a bit sore (due to his injury) but he is feeling much better! Thank you! �read more

Amanda Zech Cayce
2017-07-13T11:21:41+0000
The office staff are friendly and knowledgeable. I have to many chiropractors and Dr. Armbruster is by far the best. He... also works very well with my young children (birth through 8 years old) and makes them feel comfortable.read more

Lori Beatty
2014-09-05T23:31:46+0000
I sent a friend of ours to Dr.Armbruster as well as my husband. My husband has been to many chiropractors over the... years and Dr. Armbruster is by far the best. I would, have and will continue to recommend him to anyone needing help. Thank you Dr. Armbruster for all you do for us.read more